Some files not scanned

Tags for this mod

Immersive Weapons seeks to drastically enhance the variety of weapons in the world of Skyrim in a lore friendly way. The goal of every addition is to blend into the lore, balance and feel of the game for the most immersive experience possible.

This mod does not have any known dependencies other than the base game.

This author has not provided any additional notes regarding file permissions

This author has not credited anyone else in this file

This mod is opted-in to receive Donation Points

Translations available on the Nexus 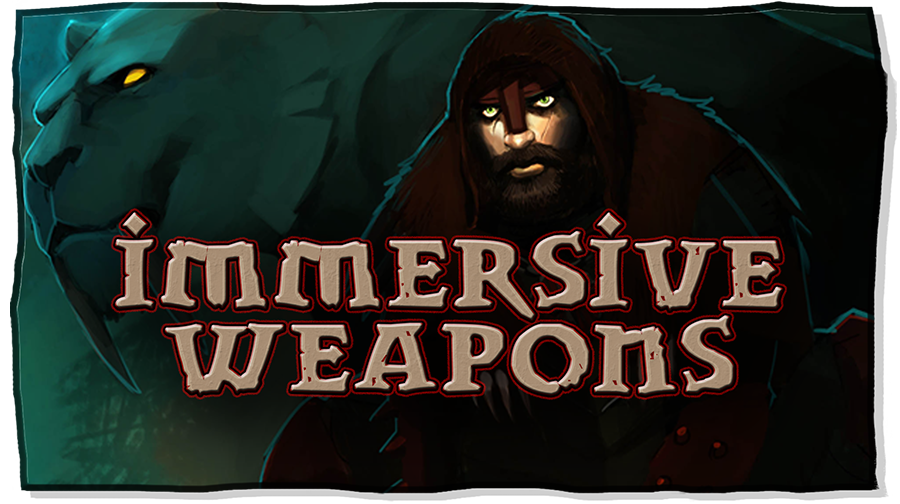 A Weapon Compilation Mod
Assembled by Ironman5000, Eckss, and Hothtrooper44

If you're seeking to enhance your Skyrim with a greater selection of weapons without breaking from natural feel of the game, this mod is for you. It adds many new custom weapons that have been seamlessly integrated into the world. The items are balanced and spread across your gaming experience. You will be finding new, power appropriate weapons starting from level one up to level fifty and beyond.

This mod will be constantly evolving to bring new life into your world. Currently this mod adds 230 new weapons! They are craftable, upgradable, enchantable as appropriate. They are integrated into the game through leveled lists, vendors, placement in dungeons and onto specific people.

Immersive Weapons contains many weapons, but they all fit into the basic weapon categories. All weapon category names are taken from real, historical weapons.

Weapons have 5 identifying statistics: Damage, Reach, Speed, Stagger, and Weight.
Unless specified otherwise, all weapons have the same statistics as the base weapon in their category.

1.4:
- Got rid of the few dirty edits that were present in 1.3
- All staff weapons are used like warhammers, benefitting from those perks
- The battle staff and quarterstaff damage has been lowered to favour balance
- Staff recipes have been balanced, and the Steel Quarterstaff one has been fixed
- All exotic weaponry (and staffs, definately this time!) have been removed from all guards and soldiers, by popular request
- Exotic weapons have been taken from bandits
- Umbra is now renamed 'Umbra Replica' to satisfy lore confusion
- Fixed all weapon categories - for example mace looking weapons are all classed as maces now
- Fixed keywords on the few weapons that were causing them to be recognized incorrectly

1.2:
- Fixed some recipes that needed to be appropriate
- Fixed the Exotic Arrow projectile
- Added Quartertaffs for each weapon category, coutesy of JZBai, Fully integrated
- Removed "Slipcleave" by request

1.1:
- Fixed the flipped normals on some weapons which caused bad lighting
- Fixed badly compressed normal map textures which gave a blotchy effect on some weapons
- Removed the Hammerfell Spears due to their poor functionality
- Added the Nordic Spear collection, 3 new weapons
- Retextured a couple of weapon to improve them
- Replaced the glass scimitar mesh supposedly causing CTDs, with the 'fix' from the WOT3E page
- Removed the Snake Axe based on user feedback

Q: I experience a CTD when scrolling through the forging Menu.
A: This issue is caused by your Graphics setup overloading. Try setting iTexMipMapSkip=1 under [Display] in your SkyrimPrefs.ini file or adding the line if it's not there.

Q: I have the following NMM error:
Failure
A problem occurred during install
..."system.outofmemoryexception"...
The mod was not installed
A: This error has nothing to do with my mod. This is an error thrown by NMM 32bit for all large files.
For 32bit NMM users, I suggest a manual install. My mod is only 2 files. It is easy to keep track of.
Go tell the Nexus staff to fix this. The best way to be heard is to speak.

Q: The download for this file on Nexus Mod Manager keeps stopping before it's finished! Help!
A: This is a problem with the NMM program, and unrelated to this mod. Navigate to C: -> Games -> Skyrim -> mods -> downloads. Delete anything with the name Immersive Weapons found there. Also do the same for the cache folder found under mods. Now download again.

This compilation has been assembled by Ironman5000, Hothtrooper44, and Eckss.

Disclaimer: All weapon mods listed below are either part of weapon resource mods or permissions have been granted by the authors themselves.

Big thanks go to all the authors so be sure to endorse their mods as well as this one, it's only fair.
List of authors and their included mods:
- Hothtrooper44 for the Axestaff Weapon Pack
- 747823 for Weapons of the Third Era
- Urwy for URW Useless Resources
- Dogtown1 for the weapons from Skyrim Monster Mod
- PrivateEye for BiPolar Blade, Sixth House Bell Hammer, The Fork of Horripilation, Mace of Aevar Stone-Singer
- InsanitySorrow for Dragonbane, Ice Blade of the Monarch, Dragon Katana, Chrysamere, Goldbrand, Umbra Sword, Steel Bow, Silver Bow, Glass Bow.
- AlexScorpion for the Exotic Bow, Blades of Sithis, Dragon Ninjatos
- Cokla for the scimitar from Mongol Armor Standalone, YesThor Swords Standalone, Elven Great Blade, Barbarian Axe, Double Axes Of Skyrim, Dwarven Slayer
- gechbal for The Sword Of The One Eyed Crow, Orgnums Dagger
- ImsumDave for Black Sting
- Sushiyant for Hot Blood. Also VengenceMkII, Hel Borne, mbj_mje, and waalx for Ariyan Weapon Pack
- wulfharth for Wulfharths Dragonbone Weapons
- siberok92 for Chakram Weapon, Thresher Maul, Phoenix Katana
- RonnieMagnum for Ordinary weapons for Skyrim - Redguard blades
- JZBai for Quarterstaff
- atomec fpr Orcish Sabre, Svartbough, Ceymallari
- TESFAN123 for Aries and Tombstone Norse Great Swords
- hifoo for Cutlass
- backstept for Regent Armoury
- Issae for Nordic Spears
- Adonnay for the base of the Wolf series of weapons, concept of the hilt for these swords inspired by John Lundemo
- howiego08 for Better Bows
- luddemann for Executioners Hook

I would like to thank the users of my mods, and the Nexus community at large. I am honored to be a part of this community, and to contribute to it. Thank you for your patronage of my work, whether it comes through comments, endorsements, votes or even a kind donation. You are the reason that I spend long hours of work bettering Skyrim. The Nexus community is the reason I continue to create mods. Thank you.

I would like to personally name the Nexus users who have decided to make a donation for my hard work. Thanks!